Ukraine, currently has an abundance of youth players who are vying to make themselves known on the national and international stage. Some have already shown glimpses of their capabilities at senior level, while others are hoping to break into their first teams in the near future. This piece will focus on seven of the most promising young stars that Ukraine has to offer and will aim to shed some light on players that are relatively unknown to the rest of Europe. (All stats sourced from transfermarkt.com & wyscout.com)

Having exploded onto the scene last season with some impressive cameo performances in the Europa League, and introduced himself to the UPL with a wonder goal against his former club Mariupol, things are truly on the way up for Dynamo’s new number 10! Khatskevich has been bold enough to give the 19 year old the shirt number worn by many a Dynamo legend, showing how much faith the coaching team has in the young man’s talent. Mykola is a player who regularly takes the CAM position but can also play deeper as a CM and slightly more advanced as a CF as seen during the 2018/19 pre season.

His main attributes are his passing and dribbling. He links the play really well, threading passes into forwards and creating openings for the wide players. Whilst he has yet to score many goals for Dynamo, he is capable of finishing in spectacular fashion. He scored in his only game for Ukraine U21’s back in March and that was with his head, so he seizes any opportunity he can to have a positive impact on the game. In terms of his playing style, it could be compared to that of David Silva, providing precise passes for team mates and being able to drive at players at speed. Shevchenko has already featured him in two matches for the Senior NT and as long as Shaparenko remains consistent he should develop into a key player for both the national and club sides in the future.

Nazariy Rusyn has made quite the name for himself at Dynamo, despite having only made 4 substitute appearances for the senior side. He has only played a total of 51 minutes for the first team, over a 3 season period but has scored 3 goals, with his only 3 shots on goal. He certainly has taken his chance to impress every time he has been given the opportunity. Having scored his first UPL goal against his boyhood club, FC Lviv, less than a couple of minutes after coming onto the pitch, it seems Nazariy will be getting more of a chance to express himself as the current season progresses. His performances for the Dynamo U21 side last season were impressive, boasting a 0.76 goals per game ratio, showing that he’s very consistent in front of goal.

He boasts a strong build, which adds strength to his game. Allowing him to shrug off defenders and hold the ball up well in addition to his own finishing ability. FC Lviv’s owner was interviewed by FootballHub after Rusyn’s winner against his old side. The owner, who knows Rusyn very well, compared the young striker to Andriy Shevchenko. This is high praise. Rusyn commenting on his career goals, in a live call in interview to ProFootball on 2+2, said he wanted to break the UPL goalscoring record and then move onto Real Madrid. This season looks certain to be his breakthrough, being one of only two strikers in Khatskevich’s UPL squad alongside Biesedin. As the latter is in hardly prolific goalscoring form at the moment, it may well be the perfect opportunity to test Rusyn’s potential by giving him a starting place in the near future.

Yaremchuk may well be turning 23 in November but he is still a young talent to watch out for this season. He has already established himself in Belgium with his breakthrough coming last year. He scored 9 goals for Gent in total and had already shown glimpses of his attacking ability whilst on loan at Oleksandriya in the UPL previously. He has so far started this season well; he was prolific in pre season and scored in the opening day defeat to Standard Liege.

He could be a very important player for Gent this season as long as he doesn’t succumb to any serious injuries, which seemed to affect him last time out. As a result he has yet to make his National Team debut but it looks quite certain that he will get another opportunity to fulfil this, come the Nations League in the autumn. Roman certainly looks a natural finisher, being able to nick a header, hold off defenders and possesses a bit of pace which allows him to drift out wide on occasion and provide assists. He currently looks like the most suitable solution to the National Team striker problem that has plagued the senior side since Sheva retired.

Probably the most well known young Ukrainian football talent across Europe at the moment is Viktor Tsyhankov. Having been named in UEFA’s Top 50 young stars to watch this season, he will be under pressure to emulate last season’s form. He made a massive contribution last year for Dynamo in the Europa League, the UPL and in the Cup. His performances seem to suggest he is a more than suitable replacement for Andriy Yarmolenko, who left the club last summer.

Viktor can play on either wing, with stats showing he is performs better on the left. However, with Benjamin Verbic, more than likely claiming that wing this season, Tsyhankov will be playing on the right more frequently. He scores goals, gets assists, and is a very good dribbler. He is a good all round technical footballer but he is still young. As a result Viktor should not be criticised too harshly for inconsistency at this early stage of his career. He has yet to perform at his full potential so far this season but hopefully he can push on with the Champions League qualifiers coming up and unleash some of last season’s prolific form again. If Dynamo are to challenge for a domestic double and a European trophy this season, Tsyhankov will need to be at the top of his game, as he is such an influential player in this current squad squad. 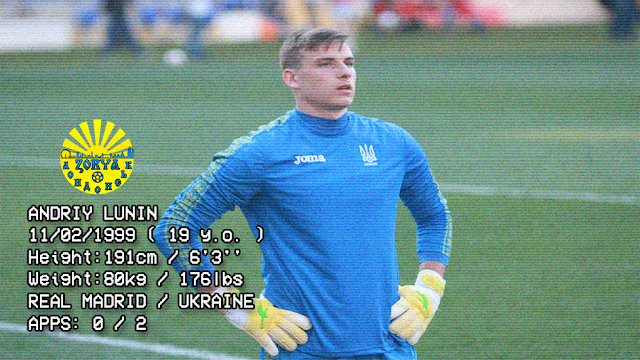 It has been quite the summer for the former Dnipro and Zorya Luhansk goalkeeper. Having had a solid season with Zorya, playing in the Europa League group stages and helping his side to a fourth place finish in the UPL, rumours began to surface about top European clubs taking an interest in him. He has since secured a dream move to Real Madrid and made his unofficial debut in a friendly match against Manchester United. His strongest attributes are that he is a great shot stopper which is complimented by quick and sharp reflexes.  He is also an accurate distributor of the ball, being consistent when passing or throwing it to his defenders or to players further up the pitch.

It seems he will be the third choice keeper at Real for the time being, but the experience of training alongside Navas and the potential likes of Courtois will be invaluable to his development. Let’s hope he gets a few cup appearances or even goes on loan to another La Liga side to get match practice. He currently looks to be the most appropriate future replacement to Andriy Pyatov as Ukraine’s national team Number 1. 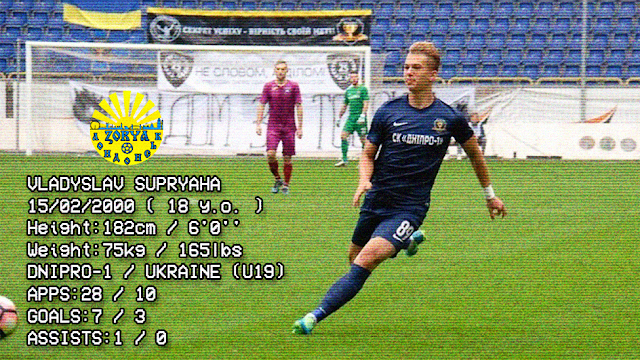 Vladislav Supryaha is the youngest player on our Next Gen 7 list. At only 18, he is plying his trade in the Persha Liha (Second tier of Ukrainian football) for SK Dnipro – 1, having previously been a youth team member at former UPL side FC Dnipro. He had a successful season last year, scoring 7 goals in 28 appearances and will look to build on that this time round. He produced very good performances at the European U19 championships in Finland, scoring a superb individual goal against reigning champions England.

If he remains consistent this season, his efforts should reward him with a place in the U20 World Cup squad, where he will be able to show off his talent on an international stage. He has so far demonstrated that he has an abundance of pace, great ball control and holds natural finishing ability. On the back of his performances in the Euros, it looks inevitable that he will be snapped up by a bigger club if SK Dnipro -1 fails to gain promotion to the UPL at the end of this season. 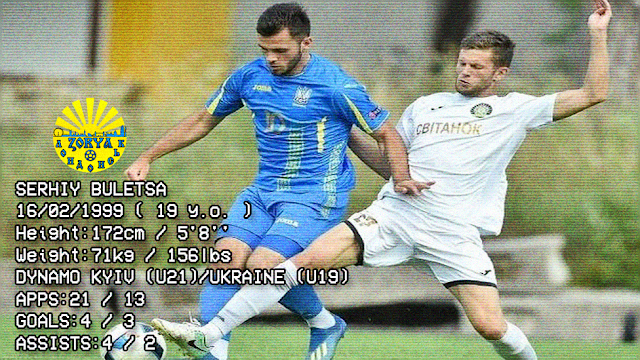 Serhiy Buletsa is another promising CM who can also play in a more advance attacking position, as he did in the European U19 Championships. Throughout the group stages he looked like Ukraine’s best player, scoring goals, feeding passes, dribbling at speed and delivering balls into the box. His dribbling style is reminiscent of Messi; keeping the ball close to his feet whilst travelling quickly and gliding past the opposition with ease. He is a composed finisher who has an eye for long shots; in this aspect you can draw similarities between him and Ukraine’s senior number 10, Yevhen Konoplyanka.

He certainly has a promising career ahead of him. Yet to make an appearance for the senior Dynamo side, it seems more than likely that his chance will come at some point this season. He has a further opportunity to increase his reputation at next year’s U20 World Cup, where he will hope to emulate the performances of a young Viktor Kovalenko in 2015. Serhiy certainly looks like an exciting prospect for both Dynamo and the senior Ukraine side in the coming future.