What a year it’s been for Ukrainian football! There have been so many stunning performances in both the collective and individual spheres for us to enjoy! Below are our the Zorya Londonsk 2018 awards of recognition for the those who we believe produced consistent and high calibre performances throughout 2018!

Our 2018 National Team Player of the Year is RUSLAN MALINOVSKYI ! With usual talisman Yarmolenko having been injured for most of Ukraine’s games this year, it had been required that somebody else stepped into his boots! Malinovskyi has been that Player! He has established himself as Ukraine’s new Central midfield stalwart thanks to his stunning displays for club side KRC GENK !

He played in all 10 games, with only two players getting more minutes than him, and scored two goals! His first against Italy and his second, the goal that won Ukraine their first ever Nations League Group v Czech Republic! Konoplyanka ran Malinovskyi close but due to it being the breakthrough season for Ruslan he takes home the award! 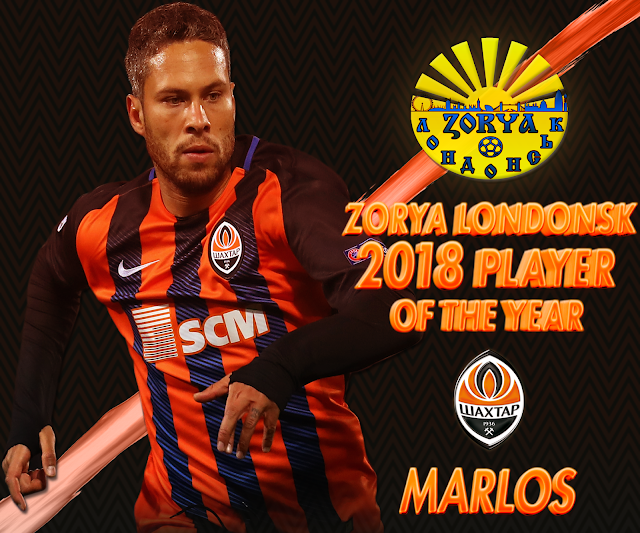 Our 2018 Player of the Year is MARLOS ! From February to December he was the UPL’s most consistent performer, getting goal after goal and assist after assist. He helped SHAKHTAR DONETSK seal the 17/18 title with relative ease and has set them on the way to do win it again in 2019 with some brazen shifts during the current season!

He ends 2018 on 11 goals / 5 assists in the UPL! Had he not had a few spells on the sidelines with injury it could have been a whole lot more!

Our 2018 Team of the Year is FC OLEKSANDRIYA and our 2018 Manager of the Year is VOLODYMYR SHARAN! There was no question as to who these two awards were going to after both going above and beyond expectations this year! Volodymyr Sharan has led his Oleksandriya side from the relegation group in 2017/18, where his side topped that half of the table, to challenging for 2nd place this season!

They now sit in 3rd place over the winter break but certainly can continue to challenge Dynamo for 2nd once it resumes! Volodymyr Sharan’s team’s style of play is compact and disciplined. The side prides itself on its defensive qualities; being traditionally hard to break down; hence why they succumbed to countless 0-0s in 17/18! However, they found their shooting boots in 18/19 and whilst they don’t have a consistent goal scorer, the goals have come from across the park!

Oleksandriya embody the spirit of Leicester City, they have no real superstars but as a unit strive to give their all for their manager and fans week in week out! Europa League awaits if they keep this up in 2019!

Finally, our 2018 Goal of the Year goes to VLADYSLAV KULACH of Vorskla Poltava!

His stunning Cristiano-esque bicycle kick was always going to take some beating but the sheer technique and optimal connection meant it was never going to not win! A few honourable mentions must go to Maryan Shved’s wondergoal v Zorya Luhansk and Viktor Tsyhankov’s stunning free kick against Karpaty Lviv!